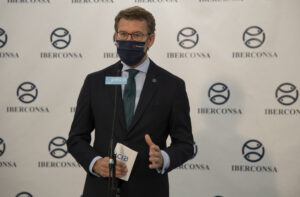 On the occasion of the 40th anniversary of our company and after postponing the visit for more than a year due to the pandemic, Alberto Núñez Feijóo visited our new factory located in the repair dock of Bouzas on Friday 14 May 2021.

The current president of the Galician board, has highlighted that Iberconsa, with presence in Europe, America and Africa, exemplifies the companies “that carry the flag of Galicia all over the world”, and wanted to convey his admiration and gratitude to the company for having built the Bouzas factory in the midst of the health crisis.

With this visit, he took the opportunity to highlight the important role played by companies in the fishing sector for the Galician community, making it clear that “Galicia would not be what it is without this sector, its image and its brand would not have the international projection it has without it”.

For his part, the CEO of Iberconsa, Alberto Freire, explained that the company, founded by four Galician partners, maintains its “decision-making centre” in Galicia despite having grown to become the world’s leading producer of hake and wild shrimp.