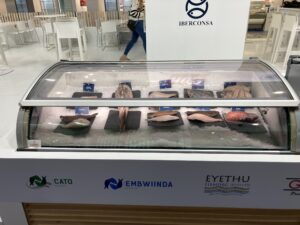 Seafood Expo Global, the world’s largest seafood trade event, was held this year in Barcelona (Spain) on 26, 27 and 28 April, exceeding all expectations.

The Expo occupied 39,847 m2 of net exhibition space spread over four halls and the Galleria in fira of Barcelona Gran Via. It brought together a total of 1,550 exhibiting companies from 76 different countries and represented an estimated economic impact up to 100 million euros for the city.

More than 26,630 seafood buyers and suppliers from all over the world attended the event despite the current geopolitical situation in Russia and the strict quarantine in China. A great success as shown by the fact that the attendance figures of the last edition held in 2019 were exceeded.

Iberconsa’s stand this year was No. 3L601 located in Hall 3, with a large structure of 2 floors with a total of 140 m2, where we welcomed our customers from more than 70 countries around the world in which we operate.

In addition, we were able to show our wide variety of frozen products, highlighting our Wild Red Shrimp and our Hake frozen on board, products in which we are world leaders, as well as taste our new line of ready-to-cook frozen dishes, which combine our best raw materials and the most advanced technology, to have a dish steamed in its own juice in the microwave, from frozen to fresh in just 5-6 minutes, like freshly made!