The second weekend of October took place the Marea festival  in Mar del Plata, Argentina. The event, organized by the Mar del Plata Consortium and directed by Gabriel Felicia, was held in the port area of the city and welcomed thousands of visitors who gathered to celebrate the centenary of the first fish unloading maneuvers that ocurred in the port.

During the welcoming ceremony, a tour of the port’s history was reviewed and the importance of the port for the city and its people was also highlighted.

A huge number of sponsors wanted to be part of this important event among which Giorno, a subsidiary of Iberconsa Group in Argentina, has collaborated to open the port to the city and its tourists with the organization of concerts, shows and sporting events as the most outstanding activities.

Thank you all very much for your attendance and see you in future editions! 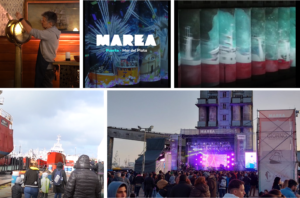