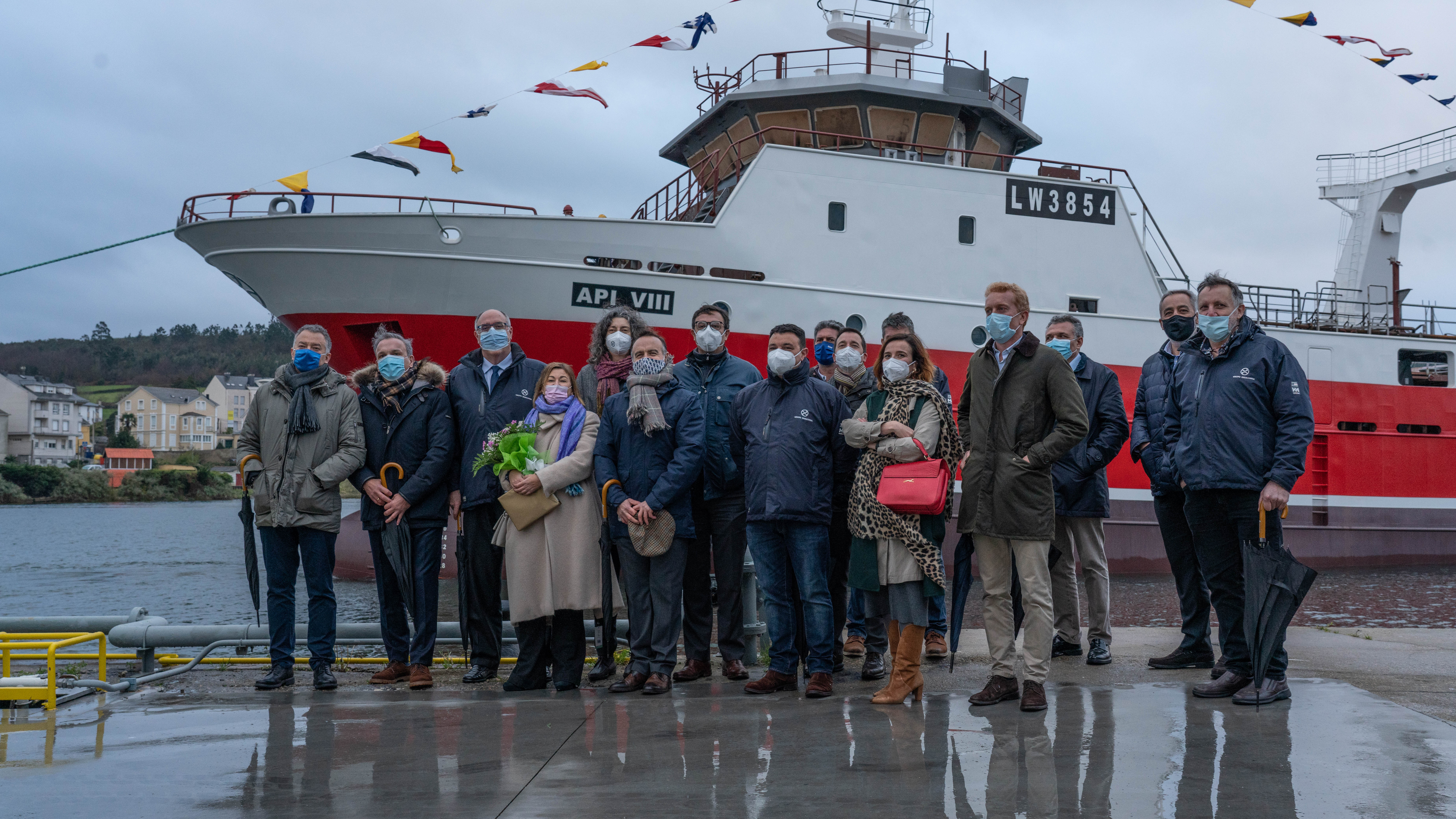 The API VIII and the API X consolidate the Group’s fleet, which grows up to 50 vessels.

Iberconsa, an International Group with origins in Galicia and a world best in class in fishing and production of seafood products, has held the official launching ceremony for its two new vessels, the API VIII and the API X, at the Armon shipyard in Navia, Asturias. These boats constitute a historical fact for the company as they are the first completely new ships built by the Galician company. With more than 40 meters in length and capacity for 36 crew members, the two freezer trawlers have been blessed by the priest of Navia Don Manuel Álvarez as the anciente tradition suggests, and proudly launched by their respective godmothers: Arancha Sainz de Baranda and Clavel Blanco, both company employees. Due to the current situation, the event has been restricted to a limited number of attendees, maintaining security and social distance measures.

Both projects have required more than 13 months of work, a team of more than 30 people, and an investment that exceeds € 26 million.

Grupo Iberconsa, currently present on 5 continents, is the leading operator in Argentina and is positioned among the 3 most important operators in Namibia and South Africa, reaching a total of 123,000 tons of fish and seafood a year.

The construction of these new vessels is part of Grupo Iberconsa fleet expansion plan, which already has 50 vessels specialized in fishing and the production of various seafood products, of which 21 are freezer and fresh fish trawlers for hake and other fin fish, 16 are freezer trawlers for wild shrimp and 13 are squid jiggers. In addition, Grupo Iberconsa has factories in Argentina, Namibia, South Africa and has recently inaugurated one in Spain, focused in production of value-added products and equipped with the most modern technologies.

After their delivery scheduled for the end of March 2021, the new vessels will set sail for Argentina, where they will begin to operate in the wild shrimp fishing, and will help to increase the fishing and production capacity of Grupo Iberconsa, which continues to consolidate its growth and leadership in the sector at an international level.

During the same event, Astilleros Armon and Iberconsa congratulated themselves for their advanced negotiations in closing a new contract for the construction of another new vessel, with an expected delivery date throughout 2022, thus continuing with the objective of expanding the fleet capacity.