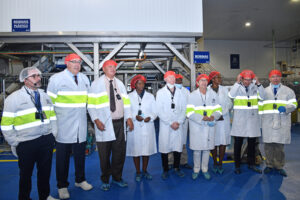 The Namibian Minister of Fisheries and Maritime Resources, Derek James Klazed, visited one of our factories in Vigo, Iberconsa Seafood Processing, accompanied by the sea councillor, Rosa Quintana, and the Spanish Ambassador to Namibia, Antonio Javier Romera.

Derek James, minister for the last year, visited the production lines of the factory in the repair dock of Bouzas and showed interest in importing technological systems and processes for the plant in his country.

Iberconsa has been operating in Namibia, specifically in the city of Walvis Bay and it has been collaborating there through strategic alliances for more than 30 years.

Namibia, after Morocco and Mauritania, is the third African country that supplies most fish to the Spanish market. Within this trade, frozen fish stands out above all, with 26,727 tonnes and a 7.3% increase on last year.

Iberconsa manages a total of 128,000 tonnes of catches per year, of which 24,000 tonnes come from the African country, accounting for more than 18% of its total catches.

The CEO, Alberto Freire, also recalled the pull of the fleet we have in South Africa, as an allied market with Namibia, and where another 13,000 tonnes of fish a year are processed.

The presence of companies such as Iberconsa in Africa helps to boost the local economy by generating employment and wealth. That is why this visit has been of great importance to continue maintaining and strengthening trade relations in the maritime-fishing field with the African country.